68 days later: An England fan recovers the luxury watch that was stolen from him during the Champions League final

« It’s never too late« : A British supporter was given his luxury watch this week stolen in the chaos around the Stade de France on the evening of the final of the Football Champions League at the end of May, the Bobigny prosecutor’s office reported on Thursday.

« In one of the proceedings on the evening of the final, a number of obviously stolen items had been seized. The cell’s investigations made it possible to identify the English owner of a luxury watch“, reported on Twitter the public prosecutor of Bobigny, Eric Mathais.

Worth several thousand euros, this Breitling was among the unidentified objects thrown away by a pickpocket when he was arrested by the police. The man was sentenced in immediate appearance two days later.

As part of the cell set up to investigate the thefts and assaults that occurred during this chaotic evening which tarnished the reputation of France, the police found a match between the orphan watch and the complaint from a British national received by the French justice.

« Exchanges took place with him and he was able, during a trip to France, to come and collect his watch from the Bobigny court on Tuesday.“, indicated Mr. Mathais. 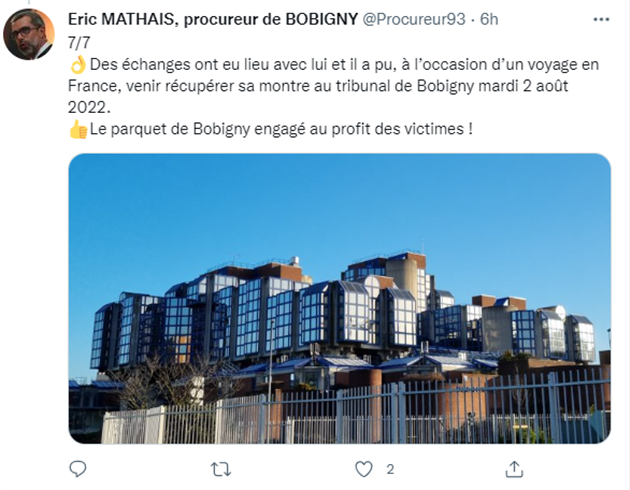 The Bobigny prosecutor’s office opened an investigation on June 10 for aggravated theft and violence around the incidents at the Stade de France, in Saint-Denis. He also set up a special system to receive complaints from British or Spanish supporters, who had come to watch the clash in Saint-Denis between Real Madrid and Liverpool.

In this case, some 240 complaints have been received at this stage. « I have good hope that a certain number of perpetrators of violent offenses and aggravated theft will be identified, tried and that the victims will be able to bring civil action.“, said the prosecutor on Twitter.

ETH may consolidate as Merge excitement wears off, says expert