by admin
in News

By Alex Paterson | WASHINGTON – Fox News attacked LGBTQ people at least once on 106 of the 181 days in the first half of 2022 (59%). Fox’s anti-LGBTQ attacks were particularly focused during LGBTQ Pride Month in June, with the network attacking the community at least once a day on 26 out of 30 days (87%).

Fox News’ attacks against the LGBTQ community during this time period were extreme and harmful. Fox anchors, hosts, and guests repeatedly spread baseless lies about queer and trans people, including falsely claiming that life-saving gender-affirming health care is “child abuse,” spreading the long–debunked myth that LGBTQ people seek to groom children for sexual exploitation, and misgendering and deadnaming trans people.

In fact, incidents of anti-LGBTQ demonstrations and violence rose from 15 events in 2020 to 61 in 2021, according to data collected by Armed Conflict Location & Event Data Project. There have already been 33 incidents in 2022, putting it on track to be even worse than last year. 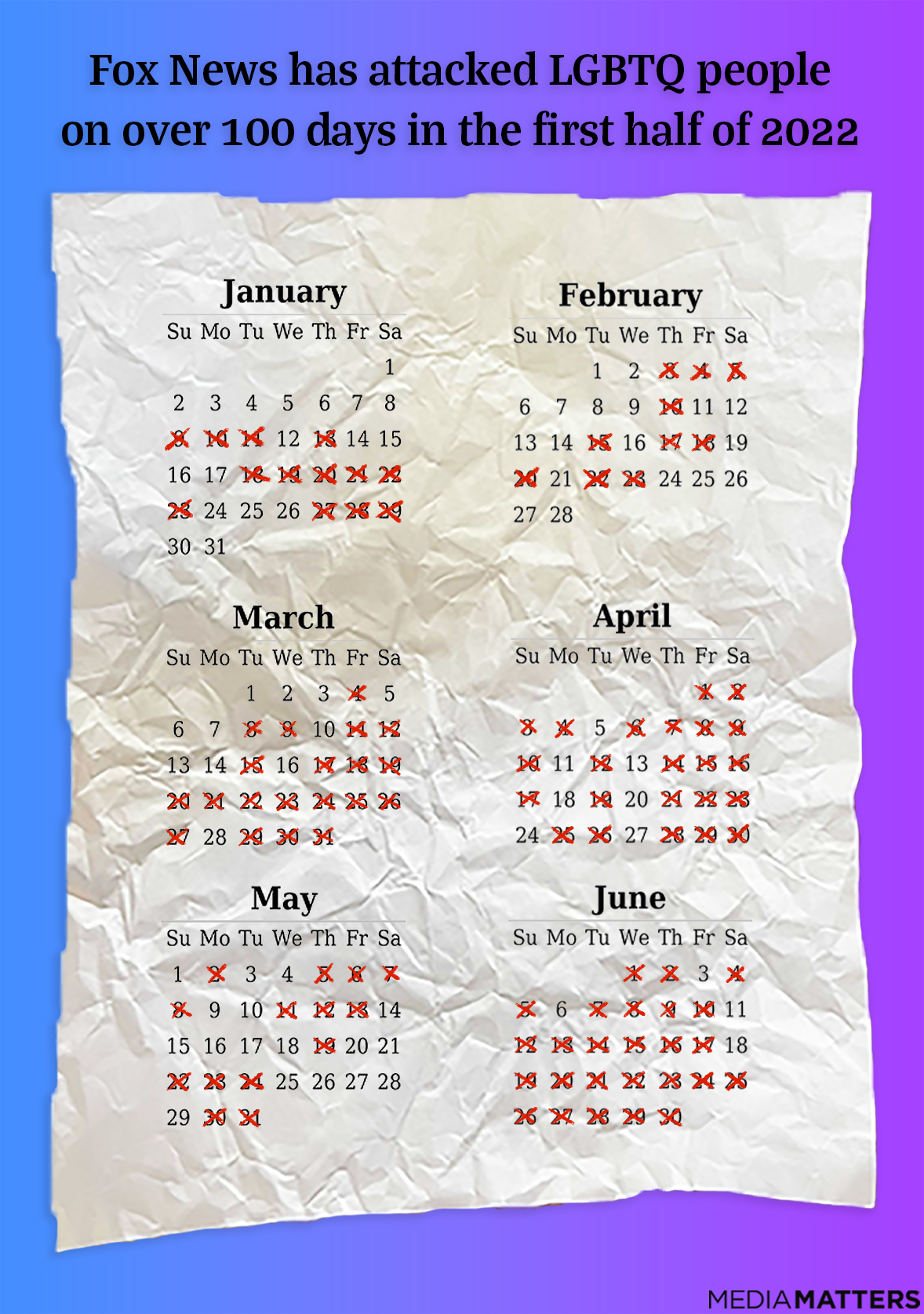 Media Matters reviewed all original news programming on Fox News during the first six months of 2022 for attacks against LGBTQ people. We searched for a variety of attacks against the community, including when a speaker baselessly claimed that gender-affirming health care is a form of child abuse, LGBTQ people are sexually grooming children, or that being LGBTQ is a social contagion.

We also searched for coverage that denigrated certain trans people who are often the target of Fox’s hatred, such as former University of Pennsylvania swimmer Lia Thomas and Assistant Health Secretary Rachel Levine.Key findings include:

Fox News attacked LGBTQ people the most during Pride Month in June, with the network attacking the community at least once a day on 26 out of 30 days in the month (87%).

The network’s attacks in June were particularly concentrated in the second half of the month, with Fox hosts, correspondents, and guests attacking LGBTQ people at least once every day in the final 12 days of the month (June 19-30).

These attacks coincided with the right-wing media onslaught against Disney because of its opposition to Florida’s “Don’t Say Gay” law. Fox News’ extreme anti-LGBTQ attacks Fox’s incessent push to vilify LGBTQ people is a key component of the right’s broader campaign to falsely claim that the public existence of LGBTQ people somehow poses a sexual threat to minors. These attacks coincide with conservative officials’ fervent efforts to repeal the rights of LGBTQ people, particularly trans people.

According to a CNN analysis of data compiled by the American Civil Liberties Union, state lawmakers have introduced 162 anti-LGBTQ bills this year, 21 of which have already been enacted into law, making it a record-breaking year for both the number of anti-LGBTQ bills introduced and signed into law in the U.S.

The majority of these bills target trans people, with numerous bills seeking to criminalize health care for trans youth or bar trans athletes from competing on sports teams that align with their gender identity.

We then reviewed the identified segments, mentions, and teasers for claims, which we defined as an uninterrupted block of speech from a single speaker. For host monologues, we defined a claim as an uninterrupted block of speech between read quotes or played clips. We did not include speech within read quotes or played clips unless a speaker in the segment positively affirmed that speech either directly before or after the quote was read or the clip was played.

We also considered as attacks claims that spread falsehoods about gender-affirming medical care, including claims that such care is abusive, experimental, or radical.

Additionally, we included claims that pushed extreme hatred about LGBTQ people, including claims that LGBTQ people are advancing a fascist agenda or that being LGBTQ is a social contagion, not real, or similar to being in a cult.

Alex Paterson is a researcher for the LGBTQ program at Media Matters, where he has worked since 2019. Alex holds a bachelor’s degree in economics from Montana State University and has a background in LGBTQ advocacy, including previous work at the National LGBTQ Task Force.

The preceding article was previously published by Media Matters for America and is republished by permission.

Couple evicted from $4,500 Airbnb in the middle of night

Couple evicted from $4,500 Airbnb in the middle of night